The Magic of Chalk

Chalk on a cue tip is as important as tread on tires. Chalk creates friction that helps a cue “hug” the surface of the cue ball and keeps the tip from skidding off – especially on those difficult shots where a lot of English is necessary to get the results needed to set up for the next shot!

Until 1893 the chalk used on leather cue tips was carbonate of lime, better known as blackboard chalk. This chalk was messy; it discolored and rotted table cloth over time and was only made in white. Most chalk used today is comprised of fine abrasives and does not contain a speck of chalk. The original chalks were produced mainly to keep the leather tips dry and secondly to assist with grabbing the ball. The only problem with this was that these chalks had no “grit” added and miscues were a big problem.

In 1892, a professional pool player from France by the name of William A. Spinks came to the United States with a few pieces of French chalk in his pocket. When he arrived, he realized that the chalk he had in his pocket was superior to the chalks made in the U.S. and went to a chemist to find out the formula. After much trial and error, he then started producing chalk adding Silica and Aloxite – giving the “grit” needed to grab the cue ball and, therefore; changing the game of pool forever. Never before could players make such difficult “English” shots as they could with the new formula!

Most recently, with new technology, chalk formulas have become more complex and “performance” chalk has been developed by many billiard companies. Chalk has become as important to pool players as the type of cue they play with.
Now that the mystery of how chalk came about has been answered – let’s talk about chalk in today’s world. Did you know that the type of tip you have on your cue dictates the amount of chalk it can hold and retain? Pool cue tips come in a variety of grades and range from very soft to very hard. The softer the tip, the better it holds the chalk.

After making several shots and chalking after each one, you will notice that the surface of your tip tends to get smooth and slippery and you will see a sheen. This is a sign that the tip has compressed. Once compressed, it is very difficult to get chalk to adhere to the surface. This sometimes happens when players chalk too frequently and tend to grind the chalk as hard as they can into the tip wearing it down faster.

The new performance chalk formulas require less chalking between shots which makes it last much longer than standard brands and they produce a lot less dust, leaving the table, balls and hands very clean. If you chalk with performance chalk after every shot, you may get negative results by creating a chalk barrier between the leather tip and the ball. If there is too much chalk on the tip, you must go through that barrier before making contact with the leather tip – and that can create a miscue.

The correct method of applying chalk is to use a “brush stoke” using the perimeter of the chalk. Grinding the chalk into the tip is not necessary and is discouraged. If you blow on the tip after chalking, there should only be a small amount of dust. If there is a lot, you have over-chalked.

Chalk makes the magic that happen between the tip of a cue and the surface of a cue ball. Quality performance chalk will take a players game to the next level. 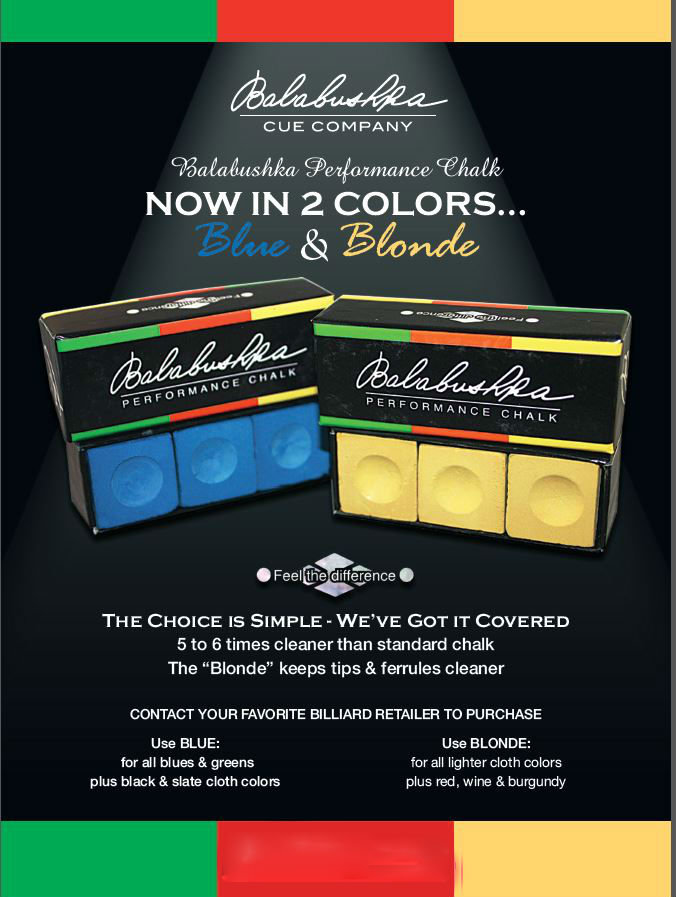